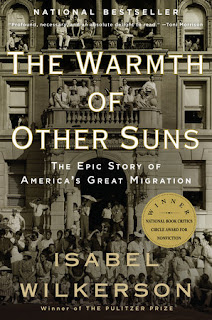 I received Isabel Wilkerson's book Caste as a holiday gift, and this was just the impetus I needed to sit down and read her first book, The Warmth of Other Suns. Long overdue, since I have had it at my bedside for quite some time (it was published in 2010!).

I was able to do a deep-dive into this reading these past couple of days, thanks to snowy weather providing the perfect ambiance to curl up with a good book. Yes, this was a very good book - an extraordinary book, in my opinion. I am awed by the tremendous detail of Ms. Wilkerson's research, alongside her gift of being able to write in such a tender and personal way.

I found the anecdotes about white silence and complicity to be the most disturbing. If Whites weren't doing something explicitly hateful, so many seemed to have an innate ability to put blinders on, look the other way, to not be troubled. For example, Robert Joseph Pershing Foster drives hundreds of miles in the mid-1950s, trying to get to California, tired and sleep-deprived, and no motel will let a Black person have a room. He breaks down at a gas station, and the White gas attendant listens:

Something in the voice, in the way the man looked in his eyes and touched his shoulder and tried in the middle of a cool desert night to console him, made Robert feel all the sadder. It confirmed he wasn't crazy, and that made him feel utterly alone. Yes, there was an evil in the air and this man knew it and the woman at the motel knew it, but here he was without a room and nobody of a mind to do anything had done a single thing to change that fact. And that made the pain harder, not easier, to bear.

These passages, with their spotlight on 'man's inhumanity to man' hit hard. Several times, I put the book down and did something else for awhile, just to catch my breath. One such time - a passage about 1966, in Chicago, when Martin Luther King, Jr. was stoned - a rock thrown at his head! Imagine, I am reading this from the safety of my home, some 55 years later, and I am a wreck. I think my horror at this scene was amplified due to the recent riots at the Capitol. Why do we hate so? Too many of us have been raised with hate, this sense that "I am better than you," "you are less than me," "I deserve more than you," "I will hurt you if I don't get my way." Or is it, "there's not enough for both of us, so I am going to get mine"? It is sickening. It is depraved.

Contrary to modern-day assumptions, for much of the history of the United States - from the Draft Riot of the 1860s to the violence over desegregation a century later - riots were often carried out by disaffected whites against groups perceived as threats to their survival.

It seems so simple to me, that we all deserve the same rights and freedoms. Our ability to see others as us is essential.

I am reminded that there are many facets to ignorance - white privilege being one. Isabel Wilkerson used the phrase "the dispassion of the indifferent." What injustices have I not even noticed?

As a White woman, I have not needed to know more details about our nation's history of Black migration, and, for many years, I never sought to know. In recent years, I am working very hard to learn and understand more. I think, how can our democracy afford for its citizens to NOT know about Black history? How do you move past something, towards a better society, if you know very little about what's been so wrong?

Obviously, this book has left me thinking!
Let me share one last and uplifting quote:

It was, if nothing else, an affirmation of the power of an individual decision, however powerless the individual might appear on the surface.

- Isabel Wilkerson, about the Great Migration

I wrote this post for Slice of Life.  All participants are writing about one moment, one part of their day, on Tuesdays. Thank you, Two Writing Teachers!
Posted by Maureen at 2:15 PM