Bright green katydid
out of place
on the yellow playscape,
lingering on the brick wall,
hesitant to leave
for the grass and shrubs,
waiting
with me,
reminding,
listen to my inner voice and trust. 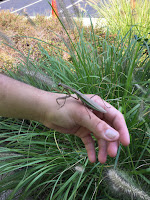 Two days later,
a praying mantis
outside my church,
walking on shoulders,
held in a hand,
reminding,
stillness and patience,
echoing the pastor
listen to the still small voice within.

Changing seasons,
last vestiges of summer,
noticing
insects making final journeys
before the cold,
wondering
what does their sudden appearance
tell me?

The first incident happened when I went for a jog with my good friend. The keys were nestled in the side pocket of my workout shirt. I remembered my pal beginning the run with some crazy yoga contortions and I mirror-imaged her for a bit, and then we were on our way, down the trail along the creek. About a mile into the run, I realized my keys were gone, and what ensued then was a frustrating and ultimately fruitless, keyless search of the trail, that included -
running back towards our beginning point,
wondering whether those keys were hidden right before our eyes along the path or
had their loss occurred with those yoga moves, right next to the car, or
had they already been picked up by some other fresh air enthusiast and turned into some unknown lost key place,
retracing our steps a second time as we dared to begin the run again,
running our usual distance which had now been increased by two miles due to the slow search of the first mile twice,
returning for a second time to our cars at the starting point,
realizing the keys had entirely disappeared,
a phonecall to my husband, who,
rather than simply pick me up, became obsessed with finding those darn keys, and
me getting cranky at what was becoming a much too long exercise outing in the midst of all the school work I had to do,
back-and-forth about the darn car fob and how expensive these are to replace,
now we wondered if the keys had bounced from me and somewhere further into the grass, and
the hatching of a plan to return again with rakes and to do an-even-more-thorough search of the one mile zone,
except I wanted to shower first, and eat some food, and work on plans,
could we just go later in the afternoon?, and
he putzed and checked his email, and
lo and behold,
a policeman wrote that our keys had been turned in by someone walking the path, and that we had been tracked down by the tiny movie theater membership card that was attached on the key ring, and
did we want to come by the precinct and pick these up?

I looked at them mysteriously when they were back in my possession, wondering who they had met in the meanwhile, and why these small pesty annoyances happen, and thinking I should spend some money on fitness clothes with zippers, as my friend suggested.

Then I forgot about the keys and went on with my life. None of this was worthy of writing about, until the second incident. Yes, barely two weeks later, I had this horrible deja vu of missing the same keys, with only a change in location to add any allure or excitement to the chase. What the heck is going on with these keys? With me?

Incident Two involved a school day, an entire school day to replay for the chase. I will spare you that! Suffice to say, I typically metro to work and I do NOT have car keys with me. However, this day involved bringing brownies for the whole staff, to celebrate it being Friday, and I wasn't about to lug those brownies on a long walk to my school from the metro. On those somewhat rare days when I drive to work, I have a tried and true system - once I lock my car, I unzip the small, zippered pocket at the top of the backpack, take out my school keys, put my home keys in their place, and re-zip pocket. Forget about it.
A.U.T.O.M.A.T.I.C.
M.I.N.D.L.E.S.S.
R.O.U.T.I.N.E.
A.B.S.O.L.U.T.E.
N.E.V.E.R.  F.A.I.L.
No need to worry, no need to debate, I can count on this.

There I was at my car door,
unzipping every pocket of my backpack,
and there were no keys anywhere.
And I was pretty dang frustrated.

Queue the retracing of steps. Queue calling family member - this time my son, also a teacher, who I was going to meet for dinner and I was now running late, "Give me a few minutes to figure out what's going on...I might need you to pick me up and take me home and get the second set of keys and come back here..." Ugh.

I went back into the school, checked at the front desk to see if anyone had turned in a set of keys at some point during the day [No, of course], and shuffled towards my classroom in a fog, thinking I'd check my cubby there...

...when a preschooler wanders into the hallway by himself - never a good sign at 5 pm on a Friday, when they should either be home or in the aftercare program. No adult anywhere. This little guy walked with purpose, cheerily called hello to me [he was not my student, but one in another class, and I was really surprised by his gregarious nature, being so at ease, so early in the school year], and I said,

"Where are you headed, honey?"

He answers brightly,
"I'm getting my water bottle," and he walks decisively down the hall, towards his room, and now I have a new hunt, because my teacher radar is going off madly, and I am following this small being into his classroom, realizing I must make sure he is safely ensconced with the adult(s) he should be with...he looks for his water bottle, and I lock eyes with his classroom teacher, who is just finishing up for the day, both of us wide-eyed and surprised that this child is wandering the school in the late afternoon all by himself at age three, the second week of school.

As he searches for his bottle, in comes his mother, carrying an infant, visibly frustrated that her preschooler has slipped away from her so quickly.

I remember my original problem, and I tell my colleague how frustrated I am that I have lost my car keys.

I am standing right at the teacher's counter by the door.

I look down at this counter - and - I kid you not,
there are my keys.

My set of car keys is sitting on my colleague's counter, in a classroom I have NOT been in at all that day.
In her room.
Not mine.
I do not understand.

What in the world?

Incredulous, I was and still am.

My colleague squealed, "I haven't seen those keys!! I did not put those keys there!! Where did they come from?"

This is my version of the 'traveling pants' - these keys have a life of their own. A life of great mystery.

How in the world did those keys end up in my colleague's classroom?
What if that little preschooler had not wandered down the hall at that precise time - would I have ever been reconnected with my keys?
Honestly,
I will never know.
I am not meant to know.
I can only say

These keys are a reminder:

I never have the full picture. In fact, how little a view I truly have of anything.

Life's message:
Grab the keys and get ready to ride.

I still have doubts

I have a dear friend who is spending lots more time on writing, now that she is retired. All of her writing is private, just between her and her keyboard. I've told her about my blogging, trying to encourage her to share her voice with others. Recently, when she visited me, we sat together and I brought up my blog on my computer and showed her several of my entries. She quietly read a poem I had written and then said decisively,

"You should end the poem in the exact way you began it...see these two lines here? You should repeat these at the end."

It surprises me that her minor critique bothered me so. I guess I have a very, very thin skin. Honestly, I do not like criticism. Even criticism presented kindly from a dear friend. It stings. It cuts. It hurts.

In a split second, all these ugly thoughts went ripping through my mind -

CONDESCENDING - How can she possibly know what she's talking about? She's never blogged before!
DEFENSIVE - That was a draft poem, not one I have finished. Plus, hasn't she missed my point? Doesn't she see the point of the poem?
PERPLEXED - Why did she think she should be editing my work when I am simply sharing?

I said nothing and immediately tried to clear that blogpost off the computer screen and move to another, while quietly seething.

Unfortunately, she persisted.
(NEVERTHELESS SHE PERSISTED!)

She said, "No, look, read these two lines...think what the poem would look like if you repeated these lines - it would be great."

I stopped swallowing my voice and replied,

"Dear friend, when you read someone's writing - especially mine -give compliments only, you should share what you LIKE about my writing."

I interrupted her interruption: "No. No 'but,' please, no. Just stop. I am showing you my creativity. It hurts to have your only response to my writing be a critique."

Then I shared with her about a book talk by Jacqueline Woodson this past summer, which I had the delight of attending. Ms. Woodson shared so much wisdom about writing, and touched on this very thing. She - the author of so many award-winning books - said about her writing,

I found those four words so comforting. Ms. Woodson said that whenever she shares her writing with others, she says "Tell me what you LOVE about it."

I'm not sure my friend understood just how vulnerable I feel about my writing. I know she believed she was helping me. We sat in awkward silence for a bit, and then I closed the computer and we went for a nice long walk together.

I feel so aware of all the flaws of my writing, the last thing I need is an echo chamber about these.

I wish that I had asked her,