Walking along the jetty

I am participating in the
Slice of Life.
All participants are writing about one moment, one part of their day,
on Tuesdays.


A big thank you to Two Writing Teachers for providing this unique opportunity
for teacher-writers to share and reflect!!

On our most recent trip to Saco, Maine, after spending the day with my father in the nursing home, my son (age 23) and I decided to take a break and walk the beach for a bit. It was a beautiful spring afternoon, with temperatures in the mid-60s, and the sun shining brightly. Once on the beach, we decided to investigate the long jetty. At the outset, we easily traversed the large, flat-surfaced rocks. We impulsively decided - hey, let's walk the whole way! It seemed like such a reasonable idea, right then.

As I continued, the walk became much more challenging. Truly, it was no longer a walk or a hike, but sheer scrambling on the rocks. Could I do this? What was I thinking? I let my son go on ahead of me, calling out to him every now and again, but I honed in on my own work. I really had to watch my footing. I was no longer taking in the scenery but completely obsessed with where my very next step should be placed. At one point, I stubbed my big toe on my left foot so hard - and, whoa, the pain was piercing. But I was almost to the end of the jetty! I couldn't give up then!

I kept thinking about the parallels to life, how those rougher periods require you to narrow your focus for a bit, to let other things go while you take care of what needs doing. I also thought about how easy it is to stop pursuing some goals once things get challenging - sometimes, if the process seems too long, daunting, or slow, I want to give up. It's important to keep on.

As we made our way down the jetty, sections of rocks were increasingly covered with slick green slime, ratcheting up the difficulty of moving forward. The 'walk' turned into a seemingly endless series of tripping, stumbling, sitting, reaching, stretching, slipping, twisting, balancing, and HOPING my feet STUCK as I stepped.

It's funny to think about my many moods on this adventure -
First, without even stepping a foot on the jetty, I was thinking "Ooh, let's walk that! It looks so pretty!"
Then, with all those flat rocks early on, the decision is made, "Hey, let's go to the end!"
Half-way down, "Dang, this is harder than I thought...but it will be fun to do with others, when we visit again in the future."
Just a little shy of the jetty's end, pure gritty determination set in: "Oh, I am DEFINITELY not turning around, but I WILL NEVER WALK THIS JETTY AGAIN IN MY LIFE!"

Finally, we made it as far as we could possibly go. Here's where we turned around: 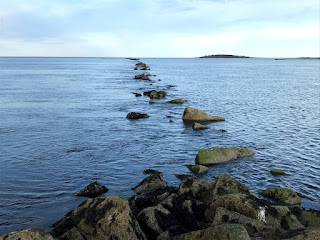 Isn't it beautiful? We took festive, celebratory photos and turned back to see the shore, only to realize: oh, no - the sun was setting!! There was to be no basking in this accomplishment.

We had to hustle back before dark.

What were we thinking?

Our supposed half-hour jaunt had taken more than an hour already...and we were technically at the mid-point. We had just as much rock to cover on the way back.

Wouldn't you think the way back would be easier? Ha! I thought it was much, much harder. We were so worn out. Plus, while we were walking, someone flipped all the rocks so that their most jagged and slippery edges were the only surfaces that we could climb on. (Or so it seemed.)

Moving a little too quickly due to that setting sun, I did an unexpected faceplant; one moment I was vertical and next, I was horizontal. Did one foot touch a slippery surface while the other foot was still in motion? I have no idea what happened. It was one amazing fall. I landed softly on my belly, with only the tiniest knick to my knee, that I didn't even realize I had until I undressed later, safe at home. (Spoiler alert: yes, I made it safely home.)

I lay there on the rocks thinking - "Oh my goodness, Maureen, you silly, silly woman. What if you had hit your head? Twisted your ankle? Broken your arm? Imagine that you were stranded here on this jetty! Why in the world did you think this was a good idea?" My son said he was pretty shook, because he heard me moan and looked back to see me lying down. He says he called out to me and I didn't answer right away. He thought - Oh no! We're in a fine mess now. In fact, I lay there feeling grateful about the sheer luck and beauty of my fall, and thinking about how important it was to focus, and to move slowly and steadily as I continued.

Yes, another life lesson: maybe the next time I feel as if I am not accomplishing my goals, I should think of it as 'laying on the rocks,' a momentary stuck, a chance to regroup and then, go on - one foot in front of the other. Keep on, keeping on.

Back on my feet, I coached myself: one foot on a rock, steady, before lifting the other foot. Slow. Purposeful. Cautious. Be the tortoise, not the hare.

And so we did, finally, return to shore. We were both SO THRILLED TO FINISH!! It was a full two and a half hours after we had started out. Plus, the sun had set. Yes, we made it down the last part of the jetty in the light of dusk.

Oh, what fools we were! Giddy fools, now that we were done.

We met a fisherman, a local, back on shore, and he noted that the slick rocks of the jetty were where the water completely covered the jetty during high tides. If we had gone out as the tides changed, we wouldn't have been able to cross back at all. Oh my goodness! We are sea illiterates! I never even thought about tides!

What an adventure, a beautiful adventure!